How to Build an Unstoppable Dental Practice with the Freedom to Enjoy It! 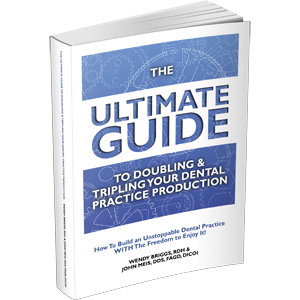 What if everything you have been told about building a dental practice was wrong? Wendy Briggs and Dr. John Meis challenge dentists with this daily. Two top producers in their own practices reveal their 5-step system that any doctor can follow to double their production. They are showing you how you can create the income needed to grow your practice from what you already have! This means there is no output of money, until you have made the revenue and determined to re-invest that into your practice. This is the beauty of the system that they have laid out.

Why Are We Working Harder and Making less Money? The 11 Habits of Highly Successful Dentists 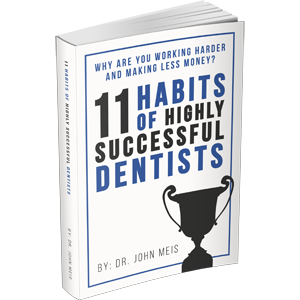 Dr. John Meis thought that in order to become a more successful dentist, he needed to become a better dentist. For 7 years, he took every CE course available, learned every new technique, and all it made him was a better dentist. His practice was still suffering. So he set out to study the most successful dentists. Quickly he realized that each was interested in providing fantastic dentistry, but they were also interested in running their practices like a business.

He realized that they were not only doing things differently, they were thinking differently. He started to study what was different and refine those things into the traits, habits, and thoughts that every single one of them possessed. And in just 4 short years his practice had tripled. he had discovered the commonality amongst the most successful and coined that "the 11 habits of highly successful dentists."

The Insider's Guide to Hiring a World-Class Dental Team 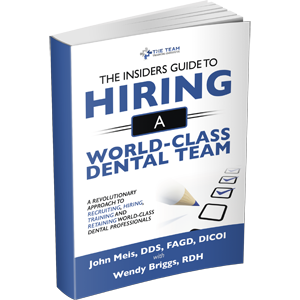 The problems with building a team are so pervasive in dentistry. There isn't a question we get more than "How can we build out team?" or "How can we can have a great team?" When we first studied really big successful practices, we noticed that they all really great teams. We thought it was because they were large and successful that they were able to attract these wonderful teams. We had it backwards. They became great practices because they had wonderful teams and wonderful leaders. The leadership helped their teams get better and better. We will explain how you can go from where you are now to having the kind of team that you have really only dreampt of until now.

The Business of Dental Hygiene

How to Create a Hygiene Driven Practice 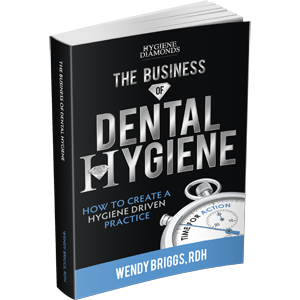 The current model of hygiene is broken. In this book, Wendy Briggs lays out not only why the model is broken, she provides a new way to approach hygiene in your practice that allows you to serve patients at a higher level while increasing production and overall practice profits.