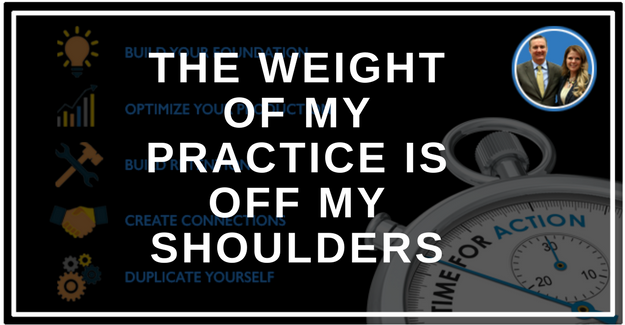 During this episode Dr. John hosts  an interview with Dr. Matthew McRae Jr. about the way he has run his practice to be a highly functioning system-filled organization that essentially runs itself. Listen in to this astounding dentist and how he leads his staff to take the heavy weight of practice ownership from off of his shoulders. Find the full transcript and more information on Dr. John and the Team Training Institute here: www.theteamtraininginstitute.com/podcast.

EP07: The Weight of My Practice is Off My Shoulders; An Interview with Dr. Matthew McRae Jr. Transcript:

S1 00:00.000 [music] Welcome to the Double Your Production podcast, with the Team Training Institute. The one place designed for dentists and their staff who want to grow their practices, by following in the footsteps of those that have done it or are in the trenches. We know exactly what you’re going through. And now your leaders, the stars of the podcast: Dr. John Meis and Wendy Briggs.

S2 00:24.847 This is Dr. John Meis with another Team Training Institute podcast. It was my distinct pleasure to be able to interview Dr. Matthew McRae at a recent Blue Diamond retreat. And Dr. McRae has a wonderful practice in Athens, Georgia, and he’s going to describe something that happens not nearly as often as it should in dental practice. And that’s the time when your team starts to drive the practice forward, where you feel like the weight of the practice is not on your shoulders. It’s an amazing feeling. Very difficult to get there without getting your team completely on-board. And that’s one of the things that coaching helps with so much, is to help team members understand where the practice is going and what they can do to support the progress. Now this was recorded in a room, early before the meeting was supposed to start. But you can hear the room fill up, and you can hear the excitement and the laughter and the connection among the people. So at the very end, there’s some pretty good background noise. So what we’re going to do is we are going to create a transcript of the podcast, and we will have that on the TTI site. So the teamtraininginstitute/podcast. So I hope you enjoy it. [music]

S3 01:50.940 Hi. My name is Matthew McRae Jr. I’m a dentist from Athens, Georgia. Believe it or not, I entered dental school at the Medical College of Georgia in 1970. We started out on a four-year curriculum. We converted over to a three-year curriculum, and I finished in September 22nd 1973. Since that time, we moved from Augusta to Athens. My first practice was at 995 Baxter Street. We stayed there for three years. We outgrew that. And now for 10 years, we outgrew that and now we’re at 995 Baxter Street in Athens. We have a team now of about 20 full and part-time team members. Also, when we first started out, it was three people in the office. My wife worked the front desk, I had one assistant, and myself. We operated at about 740 square feet, and now we at around 5,500 square feet. Since ’73, I’ve always enjoyed dentistry. And I look forward, even to this day, waking up each morning and welcoming the challenge that dentistry put before all of us. It’s an opportunity to learn and grow each and every day. It’s not a job, it’s fun. I get the same fun out of doing dentistry as I do fishing, reading, cooking, making wine. So I have a passion for dentistry, and that’s why I love it. And it’s not the money, it’s the enjoyment.

S3 03:45.392 We have a total of five hygienists. Some of them work four days a week, we have some that work three days a week, and one that works two days a week. We have one dentist that works three 12-hour shifts. At one time, our offices– the office, I was 7:00 to 7:00, Monday thru Friday. And on Saturday, we’re open from 8:00 until 3:00. At one time, they– when I had another dentist in there for a time, we had two dentists that was working 7:00 to 7:00, three days a week a piece, and I was working at that particular time. I go in at 7:00, I get off at 3:00. I started doing this 7:00 to 3:00 in ’96. After my oldest son graduated, I realized when I was working 6:00 to 7:00 in the evening, I missed a tremendous amount of the activity that my children was participating in in high school. So I ended up with my daughters, I had an opportunity to go to all of their volleyball, basketball, track, because I was getting off at 3:00, and I was their biggest cheerleaders.

S4 05:06.494 Yeah. I bet that was a lot of fun. Being able to enjoy all the kids’ activities. So you learned the expanded hours and how that helps you maximize production. Tell me what it’s done to the patient attraction of the practice.

S3 05:21.214 Well, at our practice, we’ve grown. Because even before same-day dentistry became popular, we’ve always done that from the day one that we opened. We have made it an effort to try and get each patient in, within that day. If not that morning, that afternoon. And some of these come in as emergency patient, and they develop into comprehensive patients. If you take care of a patient while they are in need, there’s an obligation. You have an opportunity to show that you care for them, and the service that you can render to them in a non-threatening environment. And if you can get them out of their discomfort, if you can aid and assist them in their problem, they will refer their friends and neighbors to you. So we have always been one, an advocate of same-day dentistry. And because if the patient is there, you don’t have to worry about, “Will they miss their appointment? Will they be late for their appointment?” And usually, it will add to your bottom line.

S4 06:29.625 Yeah. So as you built this practice, one of the things that is commonly experienced as they are building the practice and it’s growing and it’s growing. The pressure or load is great, often there’s the sense that that load is getting greater and greater. Did you have that feeling as the practice grew?

S3 06:51.399 Yes. It’s not unusual to feel like you’re out in front of a cart with everybody loaded onto a cart, having a good time and you’re just pulling them along. And this can wear you down. This could be a discouragement to you, and it’s something about once you have an opportunity to open the eyes of your staff, once your staff– once the team buys into the concept of that we are all working and striving together to make the practice grow, it takes a lot of the heavy load off of the dentist because he’s not the only one that’s looking at meeting and exceeding production everyday. You have the other producers coming along with the team to ensure that everyone is going to at least hit their baseline or go beyond it each and every day, and it’s a much comfortable feeling to feel like you’re all flying together in the same airplane.

S3 08:08.819 It’s called training, education, seminars, team meetings, visiting other offices, sending out emails throughout the week. Following up, making sure that people are doing what they’re supposed– and the other thing is, don’t only tell, but let people demonstrate to you that they fully understand. And my goal is to have each staff or team member become a teacher. And once you can teach something, then you fully have grasped it. And until you get to that point, you haven’t got it.

S4 08:55.573 And something happened recently happen in your practice that you felt really transformed the effort that everybody was putting into the practice. You had a feeling that some of that load was lifted from your shoulders. Do you want to tell me about that?

S3 09:12.300 The hygiene program [hygiene explosion with the team training institute]. We’ve had team members that’s been with us for 15 years, and it looked like they were stuck at about 800 and some dollars a day. And we had the hygiene program to come in and spend some time with them to explore the possibilities of what could be done in hygiene, and some of the things that the patient really needed. That for some reason, maybe some of the team members was not making that available for my patients. And in their mind, they had these negative thoughts that it wouldn’t work and–

S3 10:01.416 –they wouldn’t accept the care. So the first thing was to eliminate these limited thoughts, eliminate these things that have been a problem for us in the past saying, “Well, we can’t do that. They won’t accept that,” before we even ask them, before we even try. So they got rid of all of their inhibitions and just put it out there. And to their surprise, there are adults that will pay for fluoride desensitizers and whitening, if they’re presented in the correct way and told the reason why there was need in these and believed in it. But it’s another thing. If you don’t believe in something, the patient’s not going to believe you. So you first got to believe and have confidence in what you are doing. Sometimes you have to pry the wrong people out of your practice. And we’ve had some new people to come along that did not have maybe some of this baggage in their mind, and they took the knowledge on. And believe it or not, they’re new to the practice, but they’re some of the better producers that we have. Because they have not had to de-learn some of the bad information, and they came in fresh. And I mean, the sky’s the limit.

S4 11:29.209 Humans are habitual creatures, so it’s very hard to – if you’ve been in the same pattern for a long time – to break out of it. Which is why a little bit of team turnover is kind of– does help you bring in new energies and then you had new ways of looking at things that aren’t quite as habitual. And so when TTI came in, one of the things that they do is they spend most of the morning going over some of the science.

S3 12:00.707 Yes. And I think the other thing is that it’s not only that day, it’s the weekly communication to follow through, to make people sure that everyone is doing what they’re supposed to do. Because, there again, if it’s not checks and balance, we tend to drift back where we used to be by habits.

S4 12:21.793 So one last question for you. And that is, if you had one piece of advice that you would want to be able to give a dentist that’s coming into our profession, or maybe one that’s struggling, what would your advice be to them to get onto the right track?

S3 12:43.417 Do not place limits on yourself. The sky’s the limit. Never take no for an answer. You are where you are, because you believe in what you believe.