Dr. Nate Lester graduated school in 2005 and wanted to move back to rural Wyoming where he grew up. His dad was a cattle rancher, and now he lives and works on the cattle ranch. He has 50 head of cows (I am assuming that they are still attached to their bodies – but I was afraid to ask), and lots of horses, and loves being on the ranch.

When he moved home, there was an opportunity to buy a practice with just two rooms and he had one assistant. Over the next few years, he did the best that he could with the limited knowledge, no mentors and very little training. And in 2009 he found Dr. John Meis, Wendy Briggs and The Team Training Institute.

Since then he has moved into a 5,000 square foot building with 11 operatories, purchased additional practices and has a specialty practice with an orthodontist, endodontist, oral surgery. Went from 1 team member to 24 and finished last year just over $4 million in production.

He was forced to start getting creative when hiring and he started focusing on hiring for personality, because talent would rarely walk through his door.

His eyes started opening to opportunities that existed everywhere… the greeter at Walmart, the waitress or waiter at dinner or the employee at the drive through. He started looking for people who said “please” and “thank you.” They don’t need to say those kind of things, but when they do, he recognize that “that’s person that would fit into my culture.”

He started watching for people who knew how to follow a system – they didn’t have to be good at any one thing, but they would and could follow a system.

And that’s a BIG key to finding rock stars.

Finding a good team, it doesn’t just happen. It is hard, and sometimes you have to grow your own. They don’t just show up. And particularly for those of you that practice in rural areas, having trained team members show up on your door and wanting jobs, it just doesn’t happen that often

Why Does It Take So Long?


“I have found that with new hires, I had a tendency to feel like… because I thought I had a superstar, they were going to be a superstar tomorrow, and that’s not the case. They have to be slowly developed, and what I was finding is I was expecting them to be able to sit down at the same level as any of my chair-side assistants to function at that level within a, realistically, a too short of time. I expected it too fast, and so I could feel my agitation growing, because I’m thinking in my mind it’s just a crown prep. You should know where to hold that suction. You should have had everything out on the tray correctly. And the reality is maybe they’d only assisted at one other crown prep, or maybe they’d only just observed one.”

This is a common mistake, not only in dentistry, but in all businesses. We think because we hired a rock star or even just a competent person that after we show them how to open the front door and where to put their coat that they will be able to jump in and immediately make a difference. And that is an unrealistic expectation. We tend to give them too much, to fast, and it becomes a sink or swim situation.


It was during a Team Training Institute coaching retreat where Dr. Lester first learned the idea of the 3-3-3 Onboarding system. And he took the idea, the training, and he and his rock star, Julia, cranked out the system for their practice. He credits the creation of his 3-3-3 onboarding system as the biggest contributing piece to successfully on-boarding new team members.

Start by listing out what needs to be done immediately

And then you move onto listing what needs to be done in the first 3 days.

Dr. Lester and Julia took this idea, one step further and identified their first 3 day activities and called those Tier 1 (and assistants may spend their first few weeks working in Tier 1). In addition to just “reviewing” and “knowing” they added in the exact number of procedures that had to be completed before being able to move on.

The new team member has a checklist of things that they need to approach their team teammates for and ask for, when they complete the different procedures. And after they’ve done so many with the teammates, then they go to their team lead, and two different team leads will verify competency and check that off. 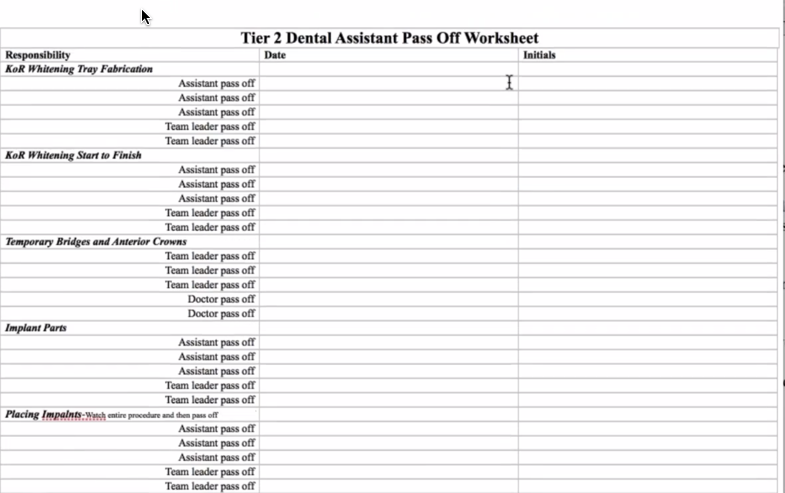 “what we found is by making sure that a tier one assistant is only doing tier one duties and not expecting too much of tier two and tier three, my agitation with that assistant goes way down. But I do expect her, as she finishes tier one– you better be competent at Tier One, because you’re all passed off on tier one duties. You shouldn’t be asking for help. You should be competent in it, and usually they are because we’ve structured it very much like dental school with the preceptor where they had to do x numbers of procedures before it was passed off. And at the end of tier one, we actually have a quiz where they go through and they take the quiz to show that not only did they just– that they didn’t just go through it rapidly but they are competent in it.”

Then they identified what they considered to be Tier 2 and Tier 3 activities, accomplishments, and expectations. They did not limit it to three days and three weeks and three months, but they do give them the goal of having all three tiers done in three months.

With the implementation of the 3-3-3 Onboarding system, they have found it easier to find clinical and administrative team members in their community. It has allowed them to 4x in just four years, in a place where everyone else is struggling to find good help.

One thing I love about Dr. Lesters’ story is that, we teach, we talk a lot about vision, and part of vision is being able to recognize the potential you see in the people that work for you, and helping them develop that potential. And that’s what you’re doing when your doing when you bring on new team members and truly invest in their onboarding. And this is a wonderful thing.

Plus, your team member retention is as important is your patient retention, and I’m going to be talking about this at our upcoming Champions of Dentistry Summit on April 21-22, 2017.

Watch The Full Interview and Accompanying Training for Only $1

Dr. Lester and Julia go through and show you exactly what they have in their 3-3-3 On boarding system PLUS inside the accompanying training – you can download the examples from their on-boarding to create them for your office.