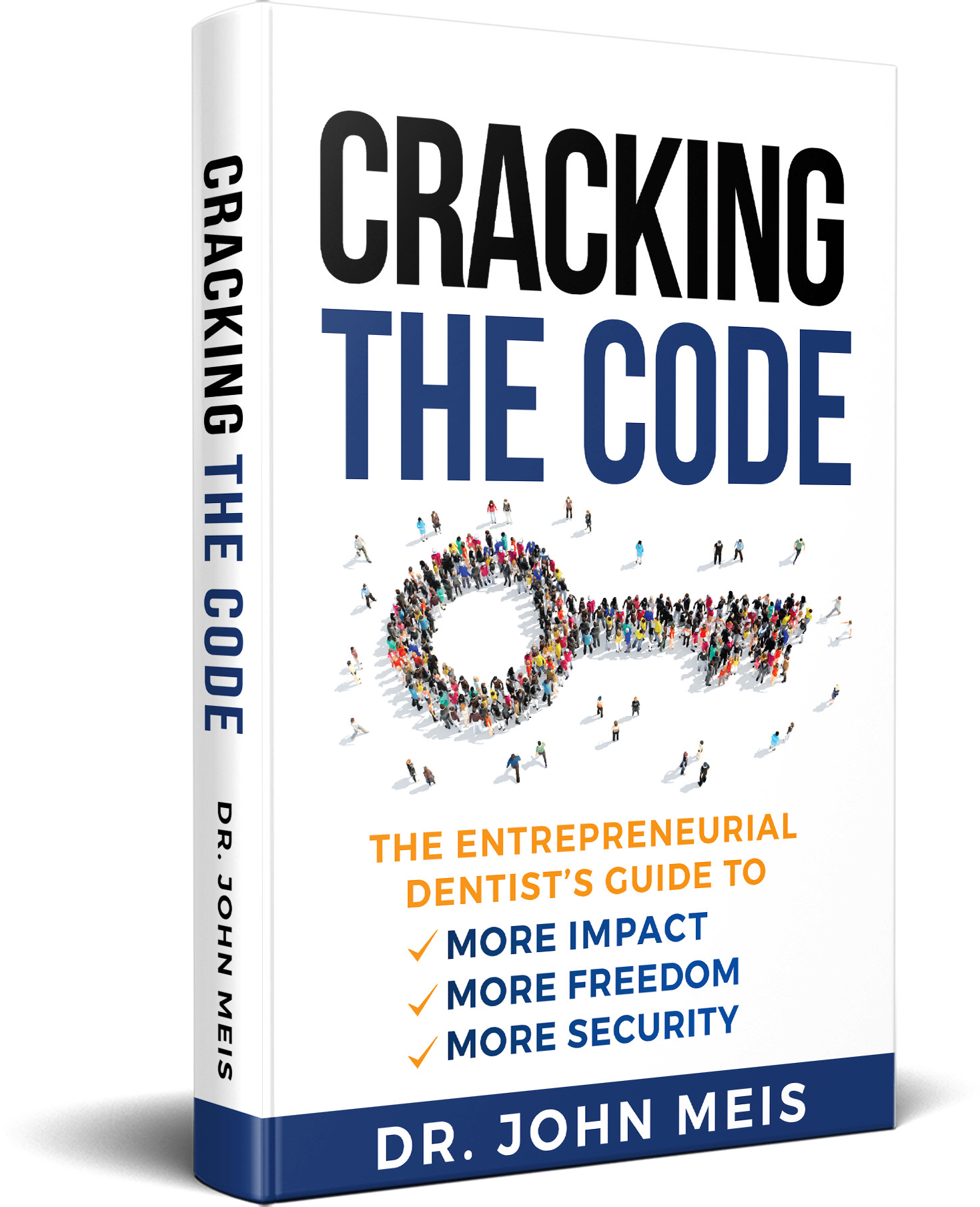 Announcement: Dr. Meis is finishing a new book for entrepreneurial dentists called “Cracking the Code”. Here’s a quick note from Dr. Meis and an excerpt from the book:

I am in the process of finishing my next book. It’s focusing in on how I think about dentistry, what has shaped my thought processes, what I have seen that works, what doesn’t work, and what I believe dentists will need to do in order to keep the reputation and integrity of dentistry intact.

The book will be a roadmap to help you care for more patients, while working less, and making more money.

I can’t wait for you to read the final version. Until then, here’s a little teaser.

Let me know what you think.

I grew up hearing my dad, my uncle and my grandfather all tell me that being a dentist is the best job in the world. I had no doubt about what I was going to be when I grew up. There was no “ifs”, about it, I was going to be a dentist. Now, my dad warned me, it wasn’t as easy as it always looked, but I was young and naïve. I just needed to graduate dental school and find a little practice to buy and I would be all set.

Boy, life doesn’t like to work out the way you plan. I did graduate dental school, and I did find a little practice to buy in Onawa, Iowa, near my hometown of Sioux City. But that’s where the happy story ended. I opened my practice in 1986, in the depths of the farm crisis, in a farm town. The family farms were failing; there was no credit because even the banks were failing. The price of corn had dropped to lows that hadn’t been seen since the great depression. It was a tough time to get started.

But all I saw was the opportunity. The opportunity to make this little practice my own. It represented all my hopes and dreams. I had listened to my father, uncle, and grandfather talk about how they worked hard to build their patient base because it is the biggest asset they had. Their idea was that when they were ready to retire, they sold their assets (their practice) and retired with the security to provide for themselves through retirement.

It seemed like a good roadmap to follow, it had worked for the last two generations, but then I saw the writing on the wall…

I have had two pivotal turning points in my career. The first came when I was 28 years old, diagnosed with cardiomyopathy, a life-threatening condition.  I was pondering my mortality, the future for my wife and children, if I suddenly exited the scene, leaving them with nothing but a pile of bills. The fear the illness caused drove me, once in remission, to get serious about building a practice that could provide for my family. After 11 years of trial and error, I created what we now call the “Double Your Production” System. It is the path that took me to over $245,000/month in personal production and created a 21-op, $6-million practice.

I had done it. I had made a way to provide for my family. I had become a very good owner-doctor, and I thought I had created security for my family and freedom for myself. (You can read more about that in my first book: The Ultimate Guide to Doubling and Tripling Your Dental Practice Production.)

Mike and I had similar dreams, he was going to start a business, and I was going to open a dental practice. We both had dreams of providing for our families and retiring with enough money to continue to provide for our families, travel, and just enjoy life.  I had a successful dental practice, and Mike had started a little agriculture company. And that is where our similarities would end.

I was excited to be in the top 1% of producers in the country, I had grown my practice sixfold, had 35+ employees, and I had been investing 15-20% of my income; I thought I was on the right path…

Mike, on the other hand, had grown his little agriculture business to 1.67 billion. I watched him buy his first lake house, watched as he and Margie and the kids would spend their summers at the lake, and he could still “work” while enjoying the summer. At the same time, I was stuck in my practice while my kids were enjoying their summer breaks without me. I watched as they bought their first boat, then their second, and pretty soon a mansion on the beach in Florida. I had pretty much watched from blindly until this one evening, when sitting with Mike out by the fire pit, enjoying a glass of bourbon talking about our businesses. Mike said those fateful words to me.

See Mike had a very quizzical mind (one of the traits of successful people – is that they are always learning and asking questions.) He asked me to explain to him how dentistry really worked, the economics, how dentists can actually make money, and how they can find the time to practice dentistry when running a business.

Now, Mike is still a farm kid from Iowa at heart.  He might have fancier clothes than when we first met. He might have more expensive taste. He might have a home that could fit both of our first houses inside of it. But keep the picture of that farm boy in overalls with a piece of hay in the corner of his mouth in mind, and you can easily picture him when he said, “Well, that’s a sh**ty business model. You don’t have a business. You have a high-paying job. Because if you aren’t there, the thing tanks. And you can’t sell a high-paying job.”

I thought I was doing everything right … until Mike said those fateful words.

The missing piece took me longer to figure out than I wish: I knew that as dentists, our practice is our biggest asset. I had listened to the so-called experts tell me to save and invest, yet only 3% of dentists will be able to retire on those investments. I had bought into the outdated thought process of retirement as a dentist – that you have to build a practice and sell it so you can live off the sale later. But that was getting harder and harder. Both of these models fail for 97% of us.

How Do You Design a Practice Where Your Income is Not Chained To Your Personal Production?

It was sitting there that night that my thinking shifted … How do you design a successful dental practice where your income is not chained to your personal production? That became the burning question that I was determined to figure out. Most people I asked just laughed or told me that is not how dentistry works.

But I was determined. What if you could grow and design a successful dental practice that doesn’t require you to be at the chair every day? What if you didn’t have to sell your practice to keep what it’s worth?

I knew that if I could crack this code and figure this out, I would have the absolute security I desired for my family and the freedom I had been seeking since I opened my first dental practice! I set out on a new mission to figure out how I could make this happen. I started researching and paying attention to what was happening with group dentistry and how practices were being valued for sale. I quickly realized that regardless of what path I wanted to take, they all led to creating a highly valuable practice that could operate with or without me at the helm.

If you want to thrive not just survive, you need to understand how this new game is being played.

For the next few years, I became obsessed with this. I joined multiple coaching and mastermind programs where other highly successful business (dental and non-dental) owners were, and I started to study what made them successful; what were they reading, studying, what numbers were they looking at, how were they building powerful teams to run their organizations, what financial models were they following. During this discovery phase, I folded my practice into a larger DSO and served as the DSO’s Chief Development Officer and later as President of Dental Teams.

I had an insider’s view of the entire valuation process. We were on the fast track to acquire practices, and I led the team that evaluated and determined what practices we would and would not acquire. I saw behind the scenes how economics had changed to advantage multiple owners and group practices in the 21st century and beyond. You don’t have to want to own multiple practices or have multiple owners (although I think you will think differently by the time you finish this book), but you need to understand how economics has changed the game in dentistry.

When I graduated, the banks would lend me whatever money I wanted. You could finance an operatory for under $10,000. The ‘normal’ path was to graduate dental school, join a practice as an associate for a year or two, then buy the practice when the doctor retires.

That just doesn’t happen anymore. Everything is more complicated. New dental school graduates are coming out of school $400,000-$500,000 in debt. Doctors can’t retire (due to the previously mentioned failed retirement mindset), and therefore the time an associate would have to wait around to take over a practice isn’t practical. There is now the option to sell the practice to a larger group practice or DSO. Banks can’t lend money like they used to due to the Federal Reserve’s bank capital requirements put in place after the financial crisis of 2006-2009. Doctors find it much more challenging to get financing. The modern dental office now requires more than $800,000 to set up. The technology has improved dramatically, but it comes at a cost. The business of dentistry is so much more complex than it was just 30 years ago.

The challenge is that we are still trying to run dental practices as my father and grandfather did. Back then, if you wrote “Dentist” on an application at the bank, they lent you money. You could easily equip your operatories, pay your staff, and there was always plenty left over for the doctor to take home.  But today, the margins have become slimmer and slimmer. The risk is higher because the debt is higher. There is less profitability at the end of the day for the doctor to take home due to managed care. The entire financial model of dentistry has turned upside down. The risk level is dramatically different than it was 30 years ago.

We can’t continue to operate the same way we used to. We have to focus on getting great at telling patients what they need and giving them what they want. This is drives productivity…productivity can drive profitability…it is the pathway to profitability. Service is the only way that we can make money. And no one is teaching dentists how to make money.

Update: The book is finished, and Dr. John is giving away some free copies to dentists. To get a free copy, click here.